This small rural church dates from the C12 with walls of mellow rendered stone and a picturesque wooden bell tower, housing six bells. It is surrounded by a peaceful churchyard with views to the South Downs. Internally, there are many fine old features, craftsmen designed items, C19 stained glass and some fine embroidered kneelers. The church has links to the poet Edward Thomas, with windows dedicated to him. The church is kept open during daylight hours (organ rebuilding is tking place during January 2020 which may mean the church is sometimes locked).

The small rural church at Stroud was built in 1897 as a mission chapel for Steep, on land given by the Nicholson family of Basing Park. The architect was H.T. Keates of Petersfield. It is surrounded by farms and would have been built for these communities. It has a simple peaceful Victorian interior with links to the Shuttleworth family who lived nearby. 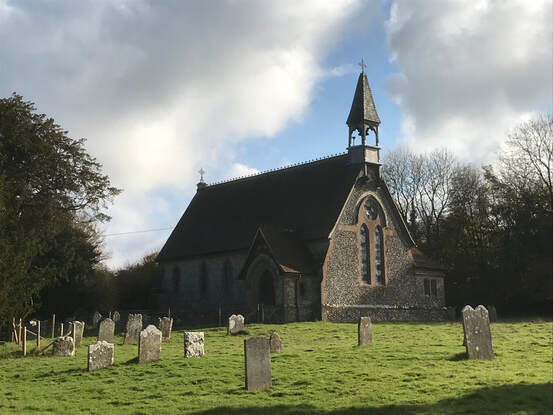 Built in 1884 on the site of the original 12th century church, St Peter's is probably the smallest church for which the architect Arthur Blomfield was responsible. A listed building, it is situated in an attractive conservation area and surrounded by an ancient churchyard, grazed by sheep. Light and airy, it has some fine 20th century glass and contains the memorials from the earlier church. The church is kept open during daylight hours.

is the parish church for Froxfield and Privett. It was built in 1862 after the original Norman parish church at Froxfield Green was demolished in 1860. It contains the Norman pillars from the previous church and is surrounded by its churchyard. Like St. Peter’s, Froxfield Green, the church has a full set of embroidered kneelers which commemorate many village scenes and personalities. The church is kept open during daylight hours.

Holy Trinity, Privett is now in the care of the Churches Conservation Trust (CCT). It was built in 1878 on the site of a 12th Century church and is more a small cathedral than a village church. Two or three services a year are held here, including a traditional Christmas service of carols and lessons. More information about the church is available on the CCT website